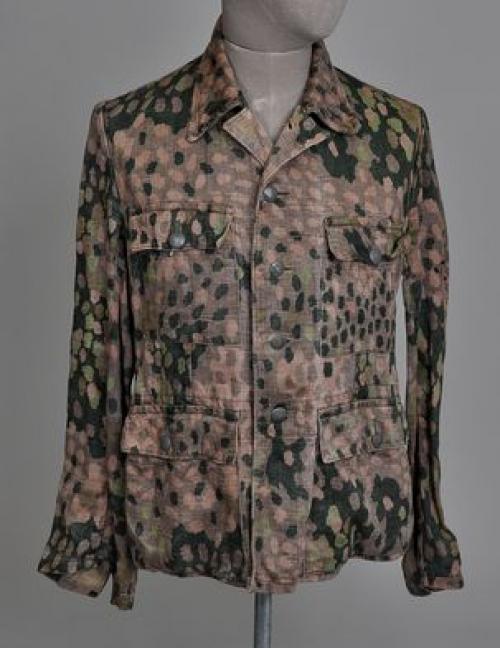 An absolutely magnificent textbook example of the M.44 tunic in the herringbone twill material. The tunic has typical areas of fade and clear signs of combat use. At one time there was a zigzag machine applied eagle to the left arm, this has been removed at the time and the tunic was probably worn by a POW. Recently purchased by ourselves in the United States and is typical of examples that went to the States upon the backs of POW?s. The condition is as mentioned previously, combat used however not excessively worn with areas of fraying. There are some small areas of rust staining to the underside of the collar and one or two areas of small holing due to prolonged mounting upon a wire coat hanger. The colour of the camouflage is excellent in a light pinky tone and the overall look of the tunic would greatly compliment a combat type mannequin. 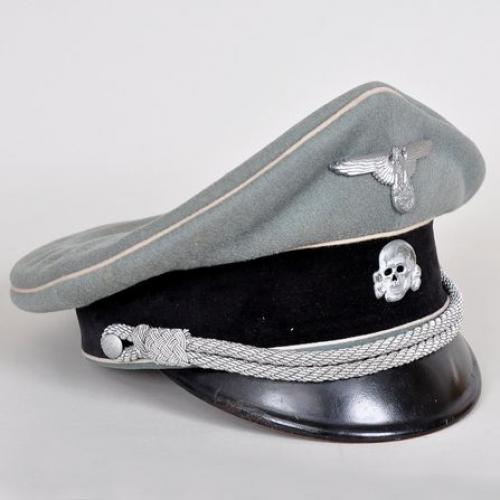 A most superb untouched condition Waffen SS Infantry Officers visor cap. Constructed in a Melton cloth very close to dove grey in colour. One very minor moth nip to the crown with three slightly large moth nips to the rear overhang. White wool piping overall. The central band of high quality velvet, standard silver wire officers cap cords, black fibre peak with some minor abrasions. The insignia fitted are an exact matching set of the aluminum shade wash with some rubbing to the finish of the head of the skull. Also the high points of the unique style SS eagle. To the interior the beige silk lining has evidence of wear use with minor staining. The central celluloid lozenge is all complete which is gold blocked below marked Sonderklasse. The all leather sweatband is complete and undamaged and the foam rubber cushion in the forehead area is all complete but has solidified. Price on request. An absolutely exceptional item being the standard ammunition pouch in the early and pre war non blackened finish. This item is absolutely exceptional and clearly picked up in a military store at the war?s end and never actually used in the field whatsoever. The leather has a wonderful orange vegetable tan leather colour to it and all metal fittings are corrosion free with a wonderful grey patination overall. There is a very clear maker?s stamp of ?1915? to the rear of the centre and within the central pouch beneath the lid is a very good regimental marking and army group stamp. This is by far the best example of this pouch that we have ever encountered and is an exceptional piece that would display wonderfully in a cabinet as a perfect example of how the pouch would have looked on issue. 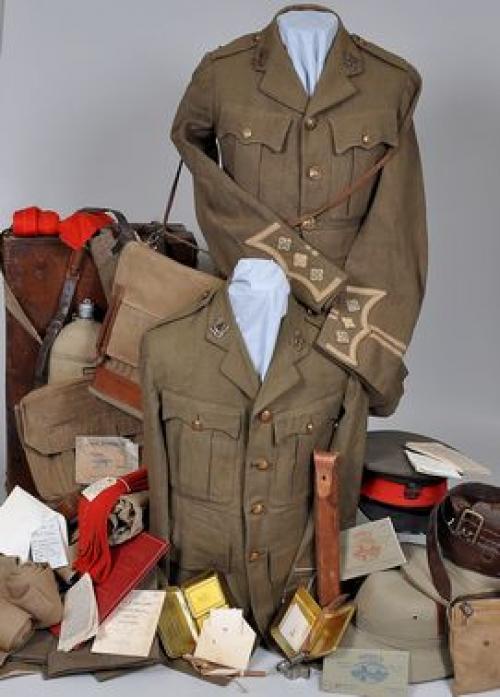 An outstanding example of a mid to late war helmet being in Completely untouched condition having to the exterior a tan and mid brown lightly sprayed camouflage finish, all bolts are vented, slotted aluminum type. The chin strap is the late war pattern, the liner having the zinc band, all leather work to the liner is good and untouched with faint maker stamps to the leather. Owner initials in indelible ink also on the liner. To the rear, the soldier has attached a gas mask tin hook to facilitate a rudimentary belt hook.size stamping is indistinct but on test seems to be a size 56 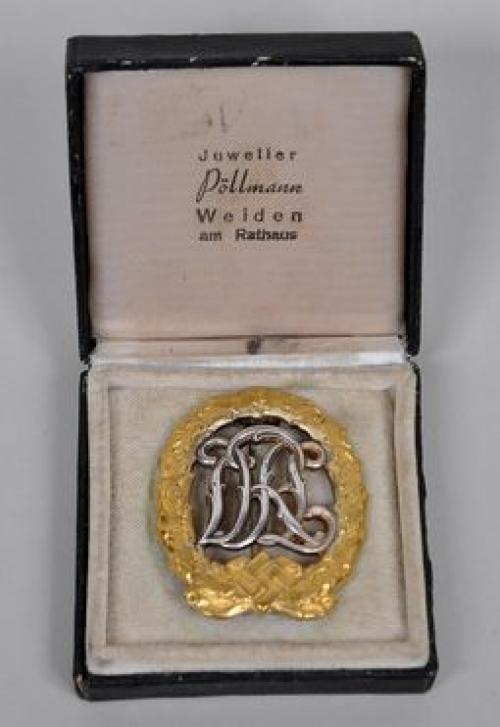 Probably the finest DRL badge we have ever had, this cased gold example of which only 1,935 were awarded in 1938, compared to 86,000 bronze and 8,000 silver. The gilt is absolutely magnificent with high quality silvered finish to the DRL intertwined logo. Complete with its wide pin to the reverse side with original hook and hinge. This piece has obviously been hand jeweller finished and is situated in a presentation case, which may have well been privately obtained by the wearer or possibly issued in this case. The outline to the award on the lower velvet style base indicates it has been situated in this case for many years. 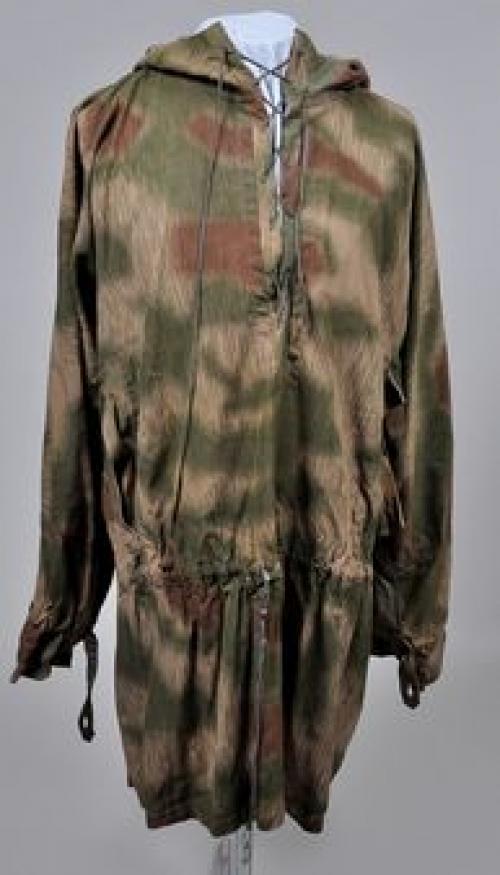 Probably the best example of this rare smock we have had in years , apart from one small stain 1 cm in circumferance at the base of the front opening this smock can be called mint, the camouflage colours are bright in the Tan and Water pattern , the hood is complete with is sniper face veil which is normally either schreded or completly missing, all of the waist tie and the neck opening tapes are the original to the garmet, Roman numeral 2 marked and RB numbered inside one of the pocket flaps, a superb piece 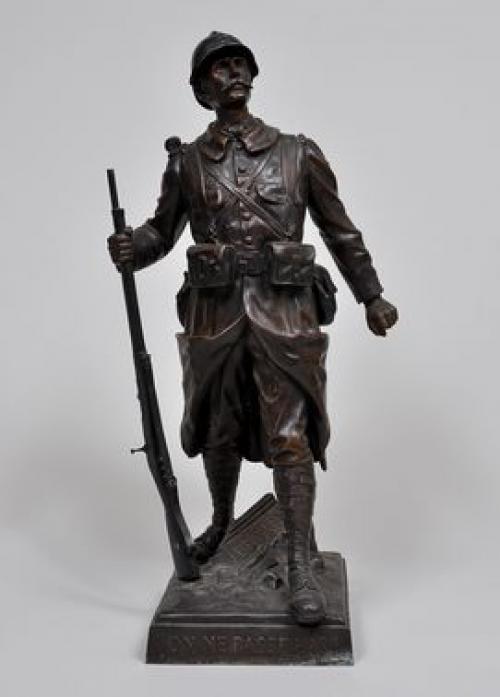 A very impressive figure of a Frech Poilu standing 65 cm in height in full marching combat uniform of the French soldier in WW 1, the detail is superb , the helmet is in a chemically finished Horizon Blue and the rest of the statue is in a Bronzed colour, it is constructed in the material very prevelant for the manufacture of these type of figures called in English, Spelter. on the base is a raised section of what should be rubble from a destroyed building with the name Verdun placed upon it and on the front of the base , On Ne Passe Pas!, in English they shall not pass.a superb display item 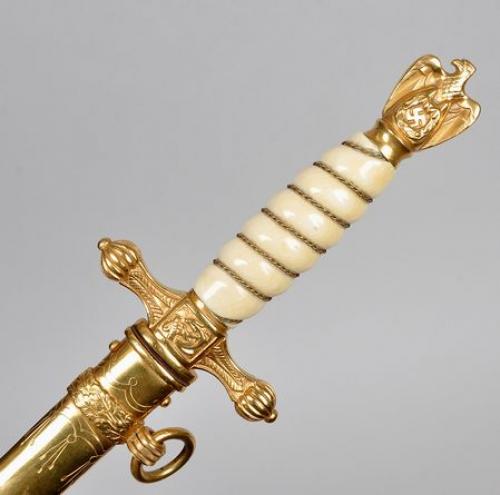 A most superb condition naval officers dagger having a superb blade by P.D.Luneschloss of Solingen. Two minor age spots close to the point of the blade otherwise mint bright with excellent clear standard double sided naval etching to the blade. All of the gilded fittings, which comprise the national eagle to the pommel, cross guard and scabbard all match in excellent gilt. The ivory grip is totally undamaged with its original grip wire intact. On the lower rear section of the scabbard there is evidence of one small indentation. Officers when purchasing their daggers had various options available to them, they could either purchase the standard dagger with the lightning bolt scabbard, etched blade with standard grip, they could then go up in degrees of having hammered scabbards and ivory grips, this officer elected to pay the extra for his dagger with the addition of the rare ivory grip. 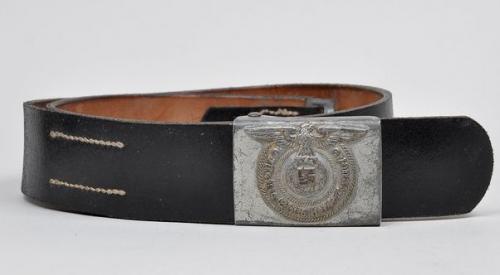 An absolutely stunning belt set consisting of a wartime unmarked steel buckle with the typical configuration to the closure catch. The buckle retains approximately 65% of the zinc wash to the surface with obvious areas of wear and patination with very light russet rust to some extremities. The belt leather is superb and from stock and basically unissued with a good clear RB number, all of its original blackened finish to the exterior and super light pinky beige colour to the supple leather interior. The belt is a good large size and clearly marked ?100? to one end with a typical zinc washed steel hook element to the other.