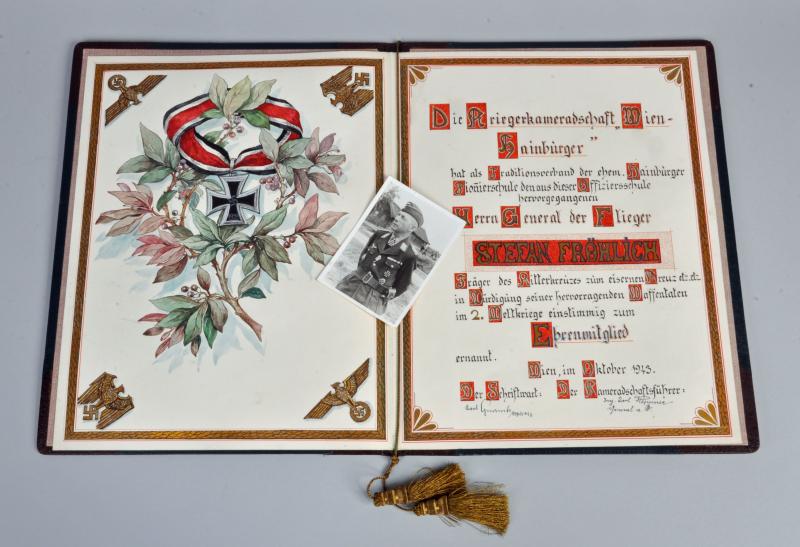 A beautifully illuminated document presented to Luftwaffe Knights Cross winner Stefan Frohlich who became a Luftwaffe General. The illuminated document placed inside a hand tooled leather folder, the document held in place by a long strip of bullion lace with two golden tassels. To the front cover of the inner document an image of the town of Hainburg am der Donau (Hainburg on the river Danube) which is 12 kilometres west of the Slovakian capital Bratislava and 43 kilometres east of the capital of Austria, Vienna, accompanied by the dates ‘1869 1918 1908 1943’, the significance of these dates is unknown to us, the artwork is absolutely magnificent. To the inside of the vellum document the central feature is the Knights Cross of the Iron Cross, to each corner is either an outstretched winged eagle and swastika or a down swept winged eagle and swastika with laurel leaves surrounding the Knights Cross. To the right hand side of the inner section of the document is the presentation script where the comrades of the former officers Pioneer School at Hainburg is congratulating General Der Flieger Stefan Frohlich on the award of the Knights Cross of the Iron Cross, Frohlich was obviously a former member of the school. Awarded Vienna October 1943, pen signed by two unidentified officials at the school. Stefan Frohlich born in Austria, at the age of 15 enlisted in the Austro Hungarian Army, served in the Pioneer Cadet School in WWI, in pilot training in Austria 1933 and became the Commandant of a new established flying school regiment, he transferred to the Luftwaffe and during WWII served on all major fronts eventually retiring on April 30th 1945, he received the Knights Cross on July 4th 1940 as a General Major and Commander of Kampf Geschwader 76, died 2nd October 1978 age 88 in Duisburg, Germany. 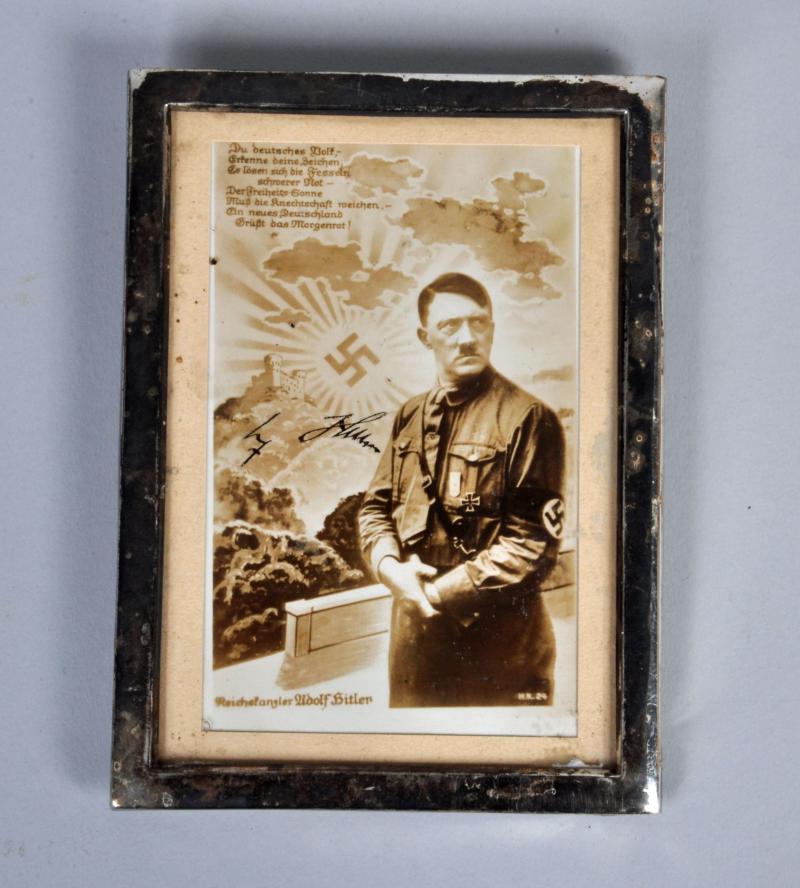 A standard patriotic photograph of the period showing Adolf Hitler wearing political uniform with swastika behind him with sunrays coming away from the swastika, pen signed just below the swastika, in its period silver frame with wooden stand. 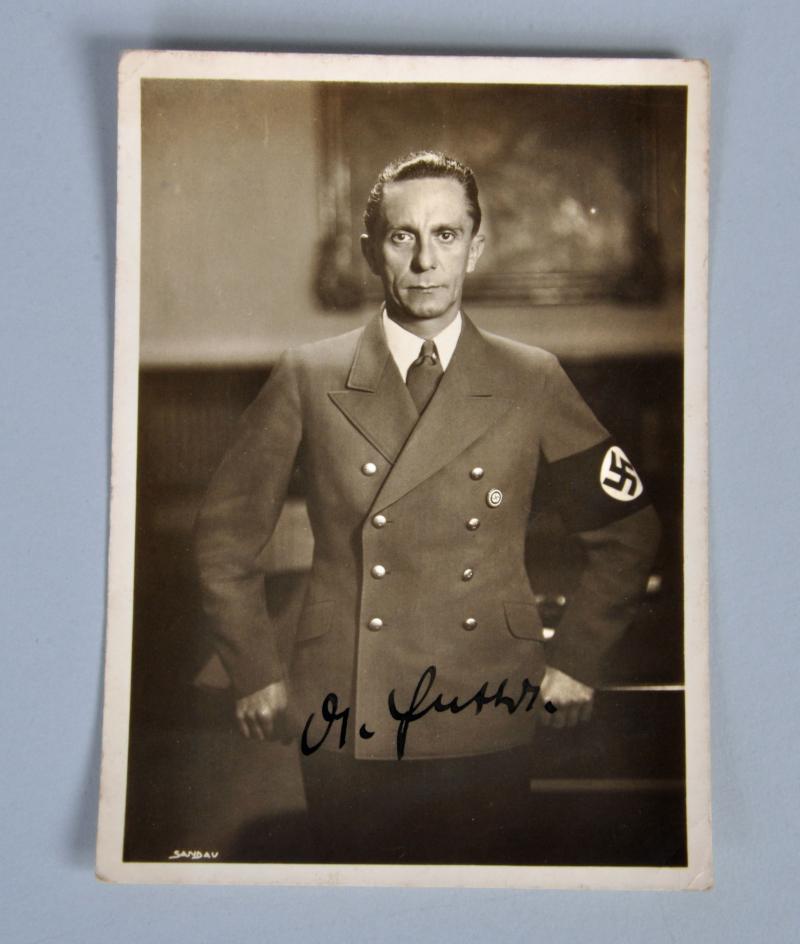 A standard postcard by ‘Albrecht & Meister AG Berlin N65’. Studio photograph of Josef Goebbels facing the camera hatless, wearing political uniform with swastika armband and Golden Party Badge, pen signed at base. It should be remembered that it was one of the strongest hobbies within the Third Reich period for young, mainly boys from the Hitler Youth to create photograph albums of both military and political leaders of the Third Reich and good collections of these autographs do turn up on the market, even today from family albums. 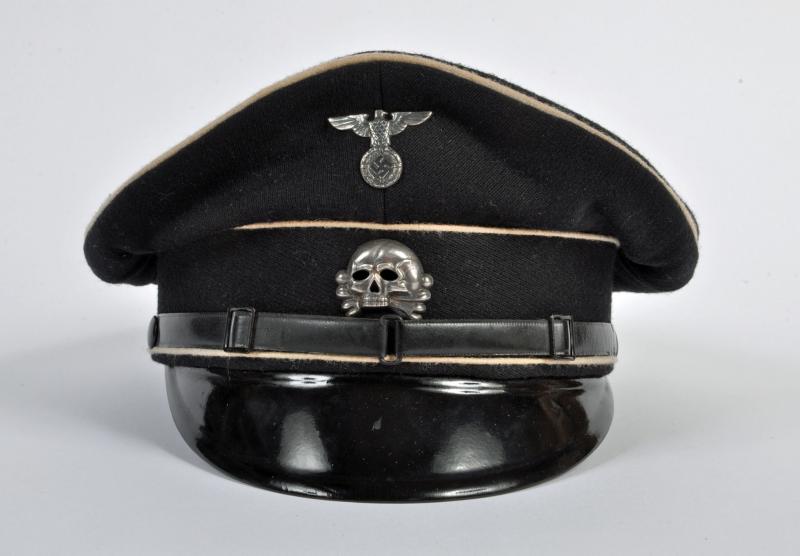 A very nice condition very early period SS mans visor cap, size 55, constructed in the finely grained tricot material, white waffenfarbe to the upper and lower sections of the black centre band and the full circumference of the crown. Standard SS style patent leather strap with central buckle. On gently easing back the left hand side of the strap the rubber ink SS markings can be seen to the interior of the strap. Fitted with the early short winged M.29 eagle and jawless skull. Bright visor. To the interior of the visor the ‘RZM’ rubber ink stamping. The interior lining is of the russet brown with the central celluloid lozenge, which underneath lays the large gold circlet with the SS runes to the centre, come aging of the gilt to the circlet evident. Mid tan leather sweatband with wear use. The RZM label being the very early style larger than the later black labels. 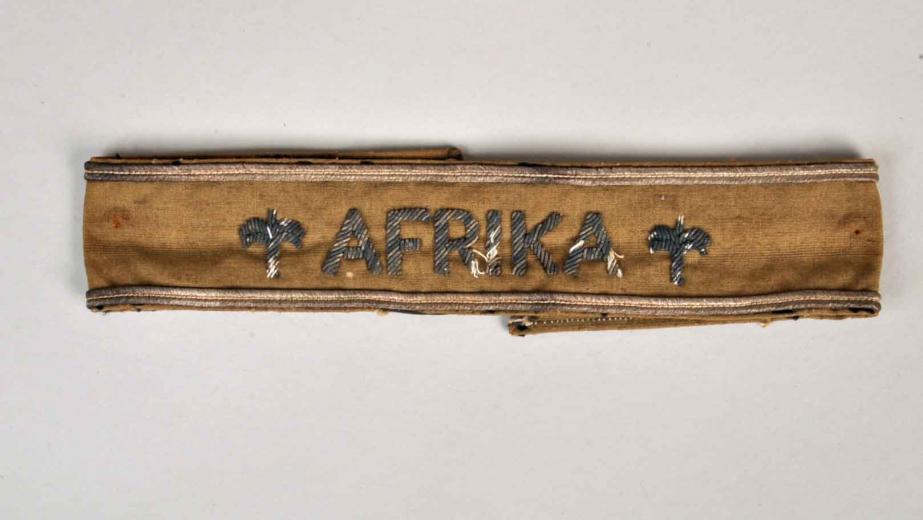 A most superb example of a probably private purchased officers bullion wire Afrika with palms cuff title. We would assume from the weave pattern of the block capital word ‘AFRIKA’ that it has possibly been Italian produced, on standard light tan backing cloth, there is some oxidisation and threads loose from the word ‘R I and A’. evidence from remaining stitches to the edges where it has been removed from a tunic and has seen considerable service wear. A fabulous piece of North African insignia. 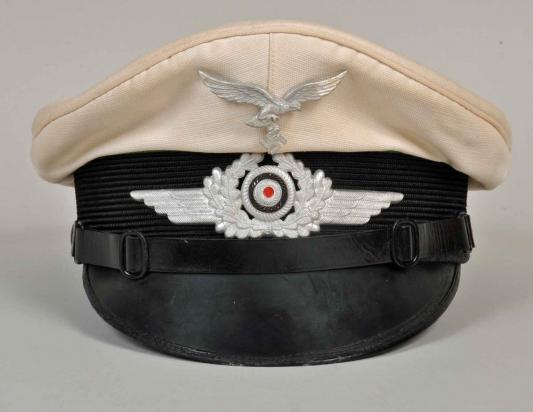 A very nice condition, possibly size 56 or 57 Luftwaffe mans or NCO visor cap with removable white top and green piped to the upper and lower sections of the mohair centre band indicating this was worn by a man or NCO in the Air Traffic Control Department of the Luftwaffe. The white top caps used to come in two forms, one with beautifully silk lined removable top and one unlined, this is the higher quality lined version. The cap is the standard saddle shape form, a matched set of aluminium national eagle and cockade, standard front strap with double oval buckles, extra ribbing to the front peak in the normal Luftwaffe form. The interior light tan sweatband having no evidence of wear of any form. The white top has one little minor line stain to the crown otherwise excellent, it is also of the higher quality thicker white material rarely encountered. To the interior the top is lined in light silk with a full centre celluloid lozenge with the retailer’s name of ‘Hut-Mayer Neu-totting’. An extremely nice virtually unworn scarce cap. 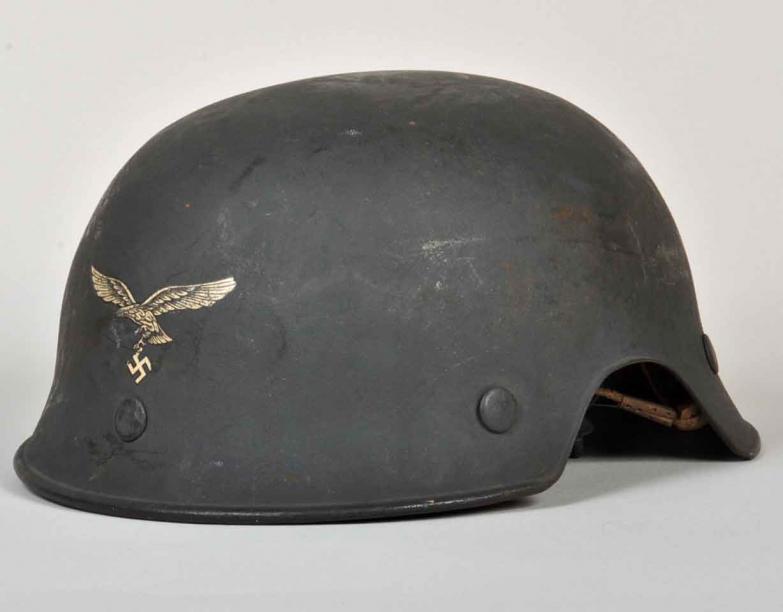 Possibly the rarest steel helmet from the Third Reich period was the helmet known as the Fliegerstalhelm. In the early stages of the war the Luftwaffe flying personnel found that they had no head protection whilst flying in combat, many images are available of flyers wearing standard steel helmets over their flying helmets, examples are known to exist of standard steel helmets being local ordnance beaten out from the inside to accommodate the headsets of the flying helmet and by 1944 a helmet was devised primarily for the head protection of flyers known as the Fliegerstelhelm. Very similar in style to one of the American anti flak helmets with two ear cut-outs to accommodate the headphones, always in Luftwaffe blue grey. A Luftwaffe eagle across the front of the helmet and sometimes having the Dutch shoe insignia hand applied indicating one of the Horstwessel bomber squadrons. The interiors are very closely associated with German paratrooper helmets, we are convinced they are made by the same company. A lot of the small leather and metal fittings are virtually identical to paratrooper strapping. In our 45 years of history we have only ever owned three of these helmets. An incredibly rare piece. 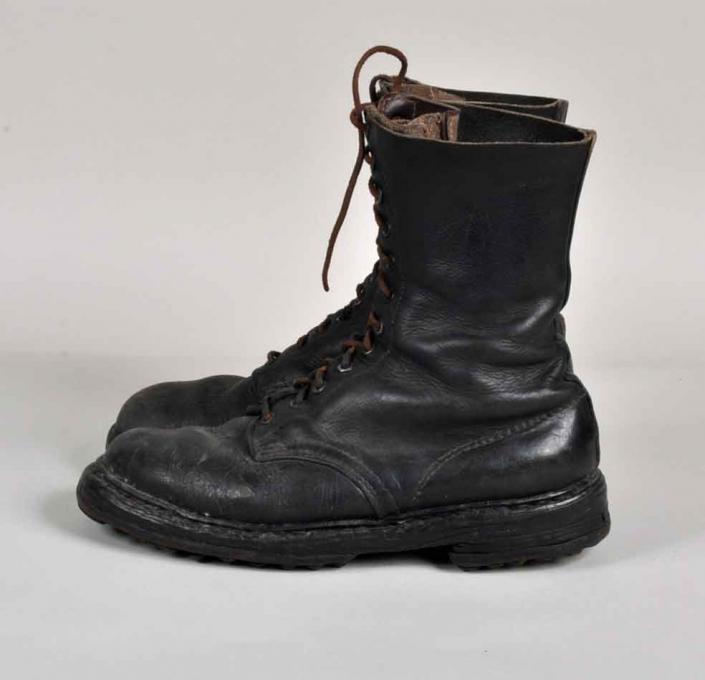 A very fine exact matching pair of the grained leather boots issued to German paratroopers. These boots have had nails added to both the leather sole and the heel. Standard 12 eyelet lace holes. Faint traces of size markings to the instep of the left hand boot. These boots were originally issued brown and have been blackened. There is no damage to anywhere on the boots. With side view these boots have a profile, which cannot be mistaken for anything other than correct WWII German paratrooper boots. 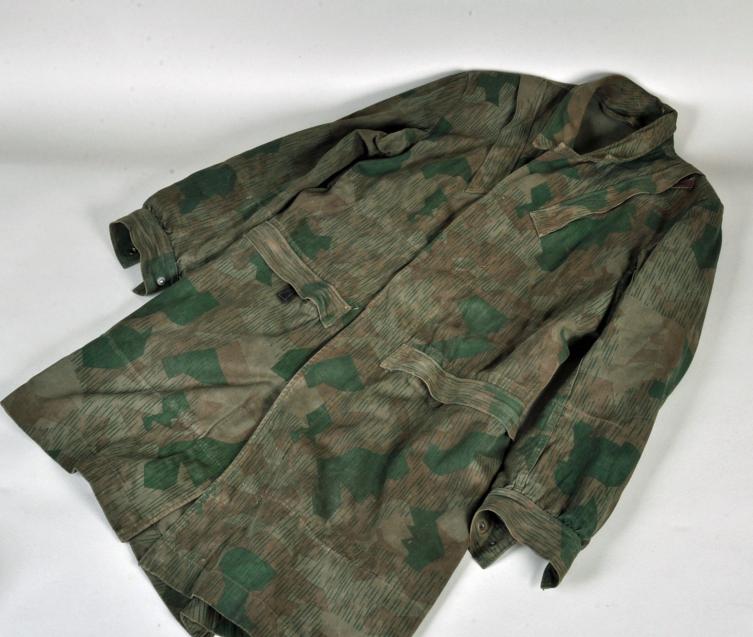 The rare and very desirable splinter pattern camouflage heavy duck non reversible paratrooper jump smock. This has seen slight service wear, there are nicks to the cloth in the collar area, one small tear in the upper back panel 3cms in length otherwise no other damage, tears or staining. Two of the closure buttons would appear to have been replaced. All the zips are metallic type marked ‘Rapid’, all have their original brown leather pullers. To the interior lining the garment is size stamped ‘1A’ with RB numbers. All of the closure studs to the leg sections are intact and working correctly. The flare pistol pocket is in place. The internal waist adjuster cords are all complete. This is a very fine example of the rare splinter pattern smock. 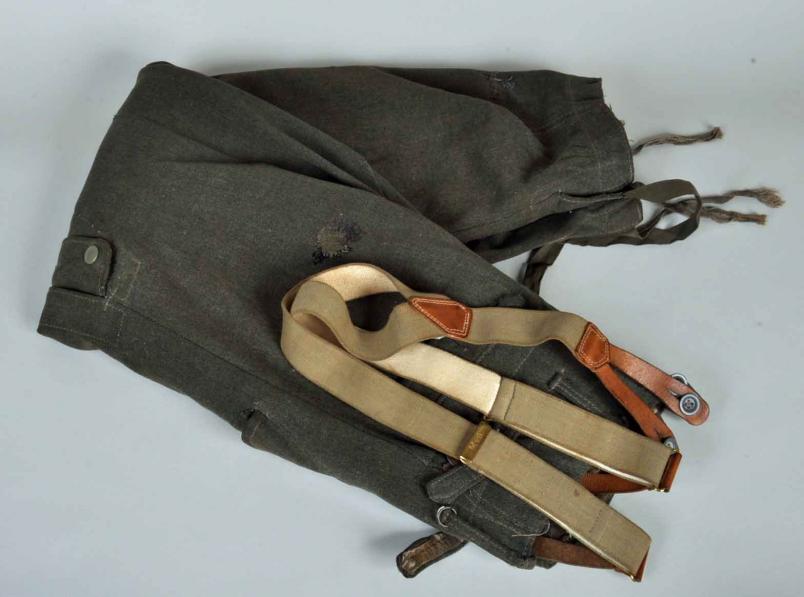 A extremely rare pair of the dedicated trousers for paratrooper use only. upper medium size waist band, all the correct features of pocket flaps with closing studs, watch pocket with matching studs , 2 rear pockets , one larger than the other both with the closure studs, Long legs, ideal for mannequin fitting, complete with its left hand side leg pocket and its right hand side knife pocket all with their correct male/female studs. Original ties intact to the lower leg area. Fitted with a set of braces, which are not military. Traces of issue stampings to the rayon waist band. These have been service worn and the nap of the cloth is thin overall. One 3cm round patched hole in the seat, another tear machine repaired, small slit repair close to the crotch, L shaped tear to the lower right hand leg with a 2.5cm round patch close to the ankle. One fly button missing. All inner pocket bags present in white linen. Both waist adjusters and their buckles intact, some rust to the buckles. A fabulously rare set, ready for paratrooper mannequin display.