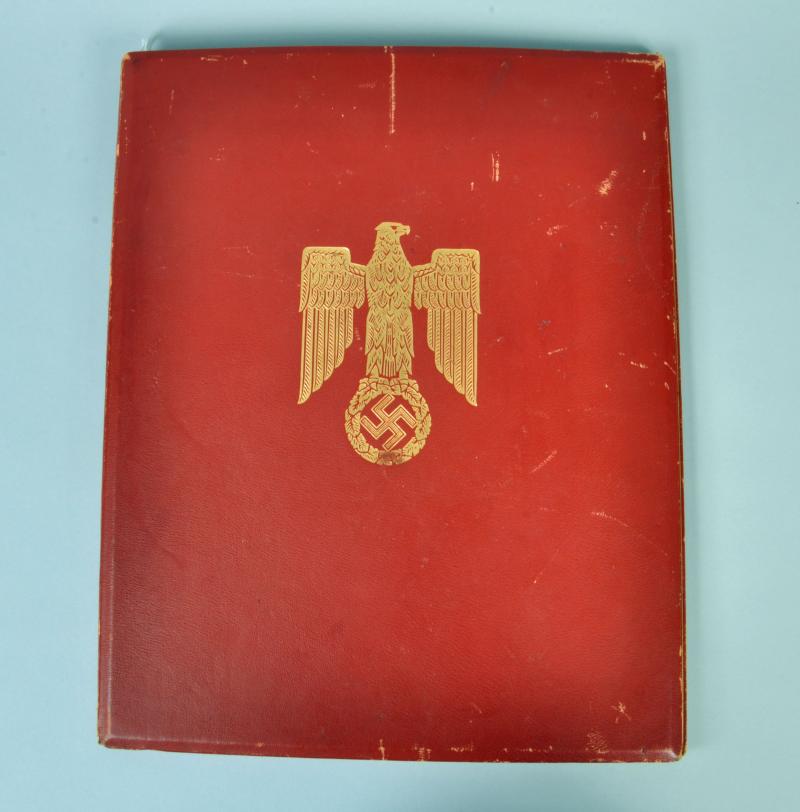 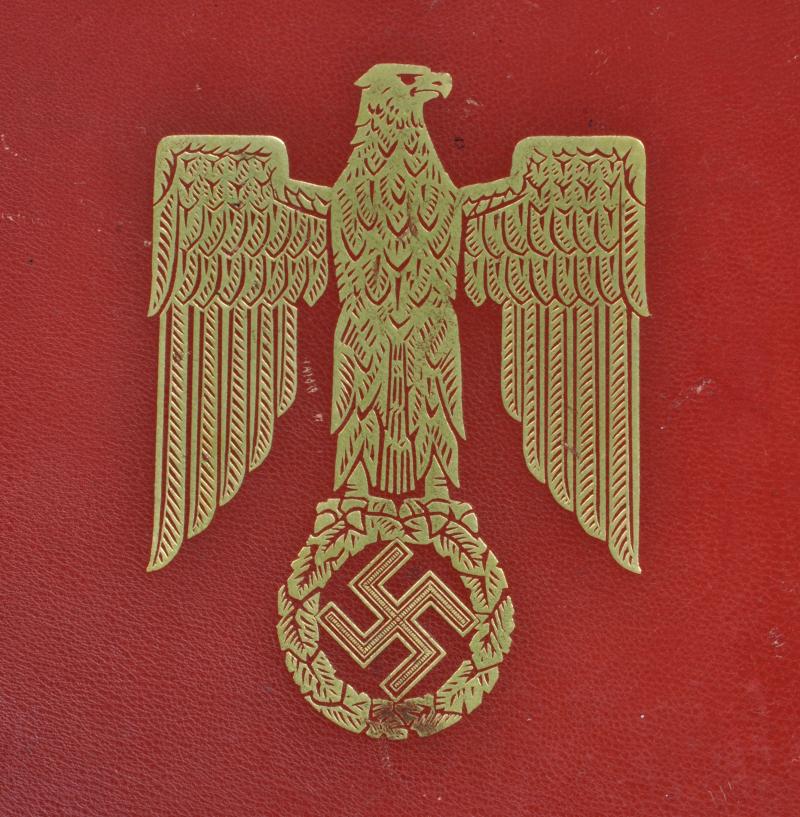 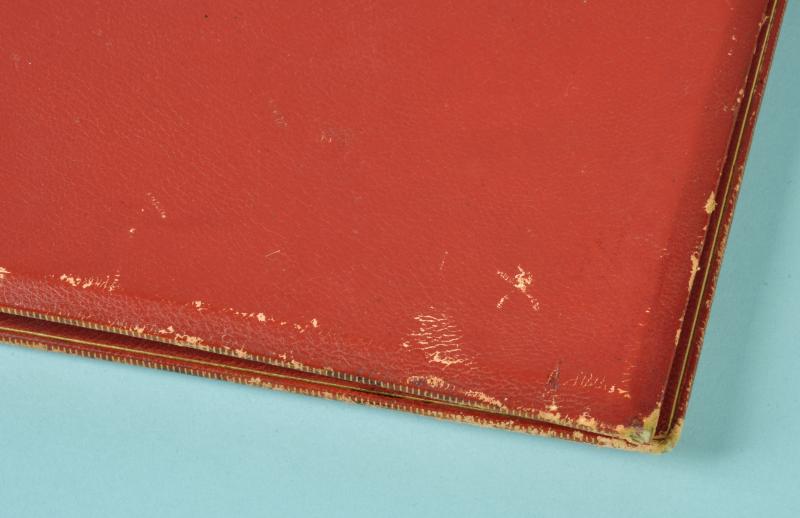 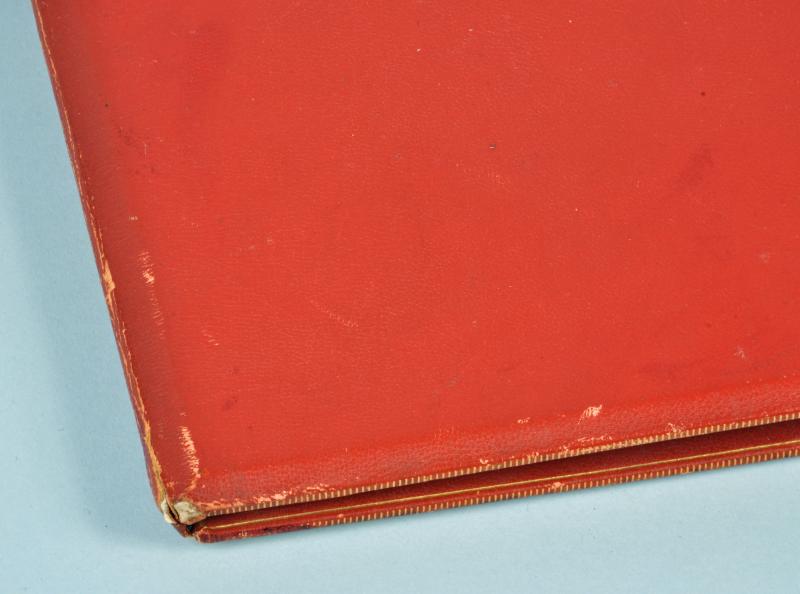 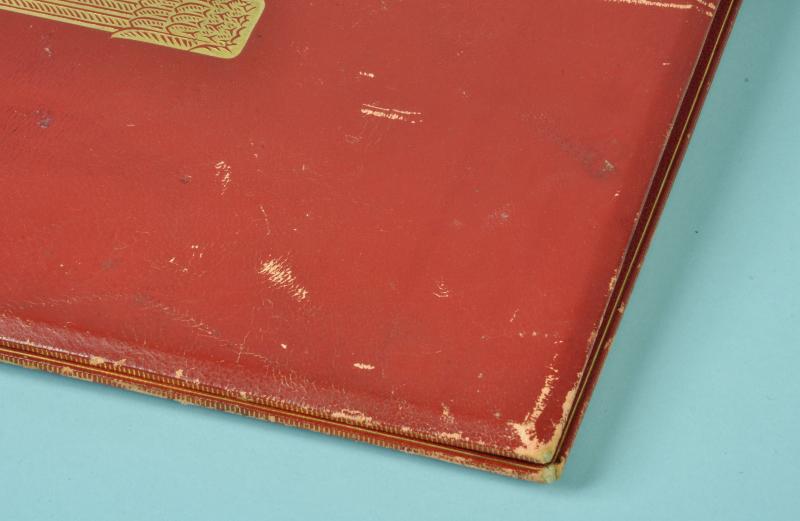 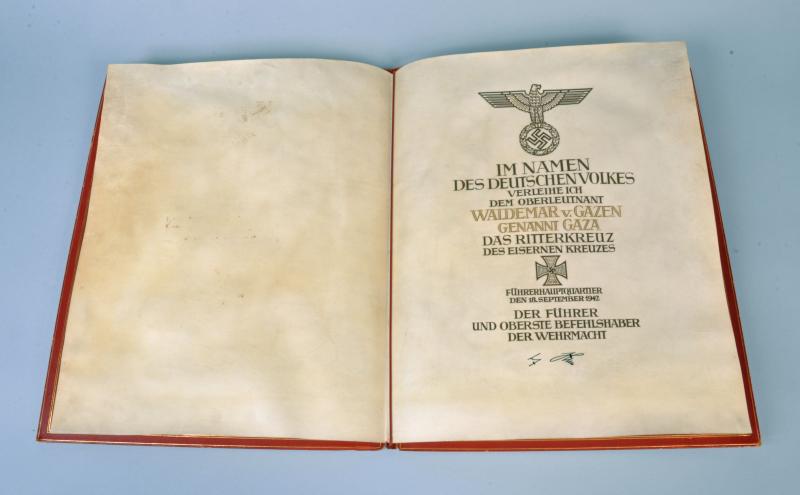 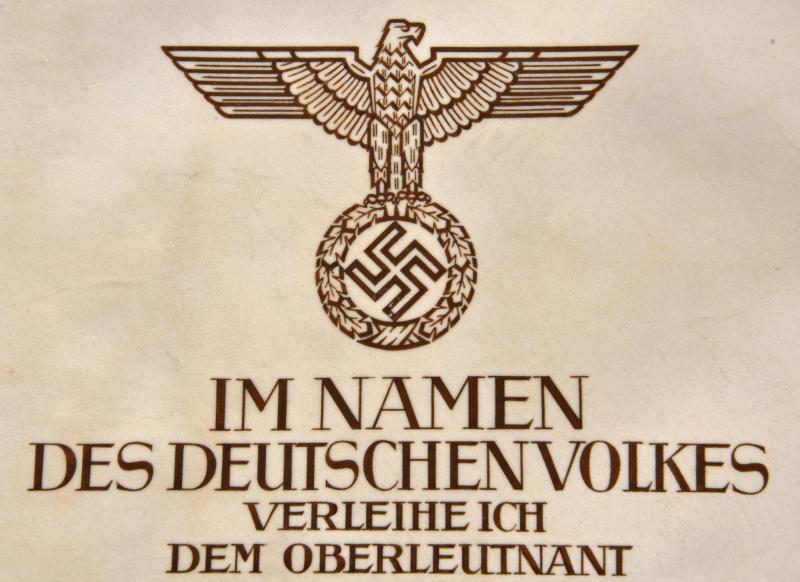 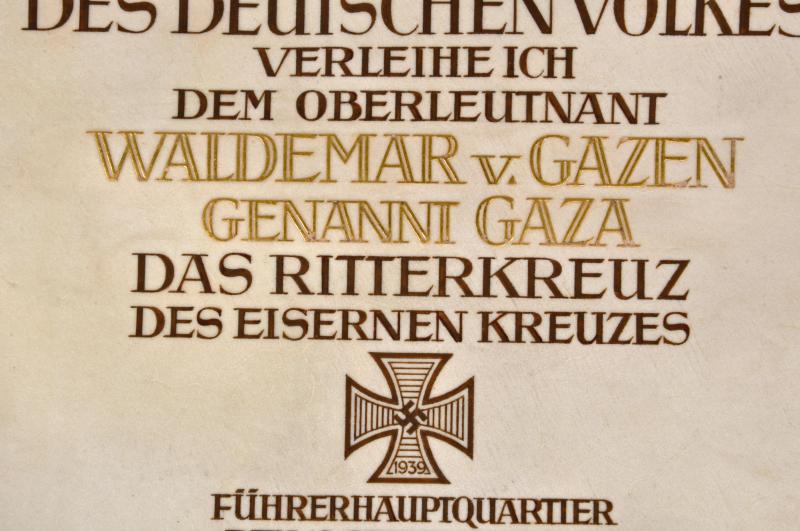 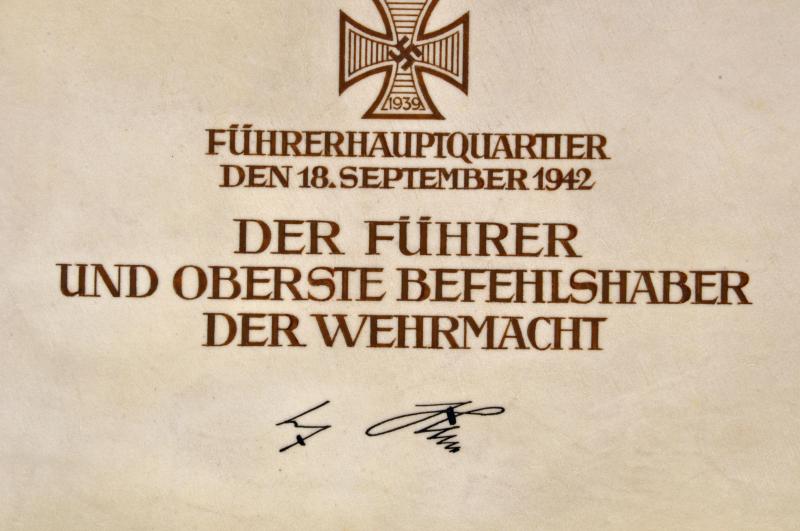 A very nice condition large formal red leather citation for the Knights Cross to the Iron Cross to Oberleutnant Waldemar Von.Gazen Genanni Gaza, awarded 18th September 1942, pen signed by Adolf Hitler. All fitted into its red folder with excellent gilt to the large eagle, slight rubbing to the base of the wreath in the area of the base of the swastika, some light edge markings and one scratch to the upper part of the folder to the front and some further scratches and abrasions to the rear side. The internal document held in place by its runner of Morocco leather. The document shows some light age foxing but overall excellent with the maker’s mark in gilt of ‘Freida Thirsch’ gold blocked to the rear inner cover. Waldemar Von Gaza joined the military service in 1936, promoted Leutnant September 38, participated in the invasion of Poland and the Battle of France as a platoon leader, promoted again Oberleutnant September 42 and was the Commanding Officer 2nd Company Rifle Regiment 66 on the Eastern Front, promoted again to Captain and received the Knights Cross to the Iron Cross on the 8th September 1942 for his achievements in the summer of 1942 in the assault on Rostov, shortly afterwards he was made Commander of the 1st Battalion Regiment 66, in early 43 he distinguished himself again as Combat Leader of a battle group in the Kuban bridgehead, for these actions he received the Knights Cross to the Iron Cross with Oak Leaves on the 18th January 1943, eventually was made Commander of Schutzen Regment 66 in April 43 and was officially Commander until 28th August 1943, his regiment succeeded in holding the German lines in the vicinity of Melitopol against numerous Red Army attacks. In September 43 Von Gaza was severely wounded in these battles, he was subsequently awarded the Knights Cross of the Iron Cross with Oak Leaves and Swords, on the 3rd October 1943 after a period of convalescence he was transferred to the General Staff of the Army in July 44, he was appointed as operations officer to the 13th Panzer Division stationed in Hungary in early September 44, he was transferred again and appointed 2nd in Command of the 2nd Panzer Division in February 45 when Gaza was taken prisoner of war at the end of hostilities in Europe and released in 1946. Awards include Iron Cross 1st and 2nd class, Panzer Badge in Bronze, Wound Badge in Silver, Tank Destruction Badge, German Cross in Gold in November 41 and the Knights Cross in three grades as previously described. Born December 6th 1917, died January 13th 2014 in Gottingen, Lower Saxony. A superb citation for a dedicated WWII army soldier.